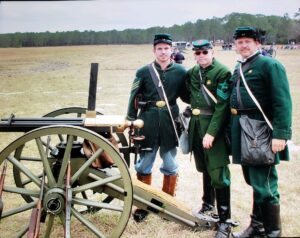 Retired Logan County Deputy Sheriff Sergeant Ray Quay will reunite with his son and grandson for one final
appearance with a .45 caliber Gatling gun for Sidney, Ohio’s Civil War Living History Weekend. The event is
scheduled for September 17-18 at Tawawa Park.
Quay designed the gun, and it was actually built by his long-time friend Dave Lamiell. :Lamiell plans to sell
the gun following the event.
“Our Gatling gun provided the opportunity for my son Tom and I to spend quality time together as
reenactors,” Quay stated, “and later, my grandson Alex joined the crew as well. My son and grandson now
both live in Florida, and I’m 82. They are both flying up for this event, and we’ve decided that it’s time to let
someone else enjoy the gun.”
Quay and his crew, including Lamiell, will speak both days of the event about the Gatling gun, the limited role
that it played in the Civil War, and the Berdan Sharpshooters, whom he and his crew have portrayed as
reenactors. On both Saturday and Sunday, Quay is scheduled to speak at 1:00 p.m. in the education tent.
Quay will also demonstrate the awesome firepower of the weapon in a night-fire demonstration Saturday
evening. That demonstration is expected to take place at 8:30 p.m.
“Dr. Richard Gatling happened to be at the Indianapolis train station shortly after the battle of First Manassas
(July 21, 1861) when a train arrived carrying wounded soldiers from the battlefield. Their moans and cries as
they were carried off the train to be treated at local hospitals deeply moved Dr. Gatling,” Quay stated.
“Dr. Gatling is reported to have engaged in a conversation with the colonel of the 70 th Indiana Volunteer
Infantry, Benjamin Harrison, during which the colonel remarked that there ought to be some way to make war
so terrible that neither side would want to fight,” Quay noted. “That conversation inspired Dr. Gatling to work
on developing a weapon that would fire 200 rounds per minute.” 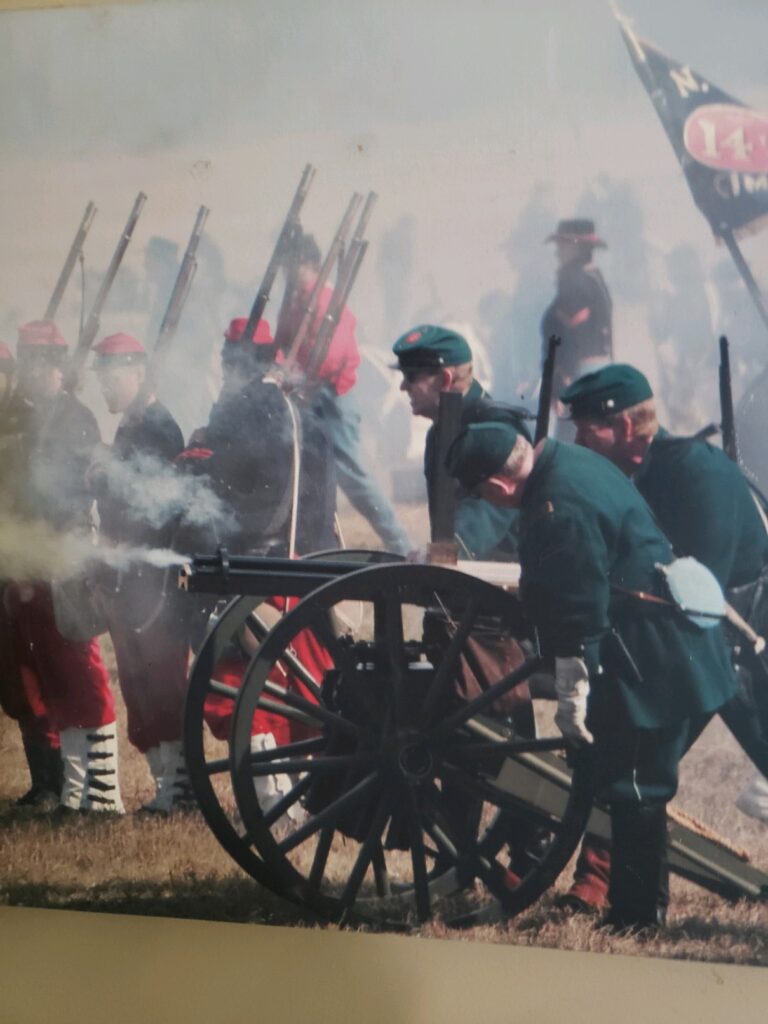 “Later that year, he had invented the Gatling gun and the following year, founded the Gatling Gun Company,”
Quay continued. “Despite the fact that the Gatling gun could have had a tremendous impact on the war, the
Federal government never purchased a single gun.”
“The Union Army’s Chief of Ordinance General James W. Ripley was suspicious of Gatling because he was
born in the south,” Quay explained. “In addition, General Ripley believed the gun to be unreliable. Even
more importantly, he was deeply concerned about the amount of ammunition it would require.”
Although not purchased by the Federal government, Gatling guns were used during the war. Some
commanders privately purchased Gatling guns for use within their units. General Benjamin Butler saw the
gun demonstrated while he was in Baltimore. He purchased twelve of the guns for $1,000 each. In addition,
he also purchased 12,000 rounds of ammunition. He personally directed the use of two of the guns during
the siege of Petersburg.
Two other well-known Civil War commanders also purchased Gatling guns. Admiral David Dixon Porter
purchased one of the guns for use by the Mississippi River Squadron. Brigadier General Winfield Scott
Hancock also ordered twelve of the guns, but the war ended before the guns could be delivered.
Quay, a thirty-year law enforcement veteran, retired from the Logan County Sheriff’s Department in 1994 as
a K-9 handler. Quay has also worked as a gunsmith, and continues to do so. He plans to display some of
the other weapons he has collected from the Civil War era, including a Confederate-issued Sharps rifle.
Photo captions:
Wearing the dark green uniforms of the Berdan Sharpshooters, Dave Lamiell (left), Tom Quay, (center), and
Ray Quay (right) fire the 1862 Model, chamber-fired .45 caliber replica Gatling gun at Antietam in 2000.
Ray Quay (center) poses with the .45 caliber replica Gatling gun with his son Tom (left) and his grandson
Alex (right) at a reenactment at Brooksville, Florida in 2010.