Scheduled for Sidney’s Tawawa Park Saturday, September 17 and Sunday, September 18, Sidney, Ohio’s Civil War Living History Weekend promises such a unique variety of activities that it will offer something for individuals of every age and level of interest.

Parking for the event will be in specially marked lots both inside the park and outside. Shelby Public Transit will provide shuttle service to and from the lots. Volunteers using golf carts will also help provide shuttle service, and be utilized to help those less mobile visit the encampments of Union and Confederate reenactors deeper in the park.
The park will not open to vehicular traffic beginning Friday, September 16 to enable the sutlers the opportunity to begin setting up their tents. Reenactors will also begin arriving early. The park will remain
closed to vehicular traffic (excepting reenactor and event participants) Saturday and Sunday. It will
reopen to vehicular traffic on Monday, September 19.
The Monumental Building’s Tablet Room (133 South Ohio Avenue) will open for visitors at 10:00 a.m. on
Saturday. The 73 rd Ohio Volunteer Infantry Band will be playing on the sidewalk outside the Monumental
Building beginning at 10:15 a.m.
The Monumental Building was the first veteran’s memorial hall constructed in Ohio. Visitors will be able
to take a closer look at the marble tablets containing the names of the more than 300 Shelby County
soldiers who died during the Civil War.
During the two-day event, visitors will be able to walk through the Union and Confederate encampments
and talk with reenactors about the war and the soldier’s experience during the conflict. Visitors should
recognize that the reenactors may have differing opinions concerning the war, largely dependent upon
whether they are fighting on the Confederate side of the Union side. 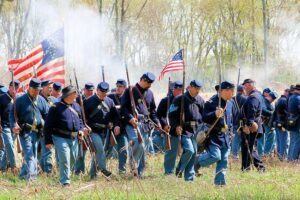 Visitors should also remember that more experienced reenactors may be more knowledgeable than those with less experience. Visitors should feel free to ask about the food reenactors are eating, the weapons being used, camp life and even tactics.
There will also be a civilian encampment that includes children. The children may be playing games and engaged in other period pastimes. The adults will likewise be engaged in period activities, including cooking.
There will be a number of speakers, several of whom are published authors and will have copies of their books for sale to the public. Those speakers include Phil Spaugy, who will talk about Ohio’s role in arming the Union. Spaugy will speak Saturday morning at 10:00 a.m. Spaugy will also have his
collection of Ohio Civil War weapons on display through the end of Saturday.
Michael Shaffer will speak Saturday at 11:00 a.m. when his topic will be Day by Day Through the Civil
War in Georgia. Shaffer will also speak at 3:00 p.m. on Saturday when his topic will be The Atlanta
Campaign and again on Sunday at 11:00 a.m. when his topic will be Stoneman’s Raid.
Shaffer’s presentation will be followed by Dan Masters. Masters will speak about The 57 th Ohio at Shiloh
at Noon on Saturday and at 10:00 a.m. on Sunday.
Ray Quay will speak about the Gatling gun and its impact on warfare at 1:00 p.m. on Saturday and at
Noon on Sunday. Quay will also have a nighttime demonstration of the Gatling gun at 8:30 p.m. on
Saturday evening.
Al Arnold will talk about his ancestor, Turner Hall, Jr. during his presentation entitled Robert E. Lee’s
Orderly He will speak at 4:00 p.m. on Saturday and at 1:00 p.m. on Sunday. 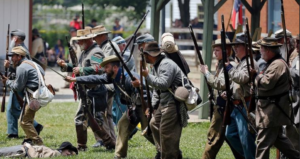 Shaffer, Masters and Arnold will all have copies of their books for sale when they are not speaking. The books will be available both Saturday and Sunday, or until the supplies are exhausted. They will also be happy to autograph the books for those purchasing copies.
Also present at this year’s event will be Doug Gill, who will portray a member of the Confederate Medical Corps. His display will be located in Wagner Glade near the education tent.
Although Union and Confederate troops will be skirmishing both days, pitched battles will be fought at 2:00 p.m. on Saturday and at 2:15 p.m. on Sunday. There will be a cannon duel between Union and Confederate artillery at 7:00 p.m. on Saturday evening.
In addition to the 73 rd OVI concert on Saturday morning at the Monumental Building, the band will also
play a concert at Geib Pavilion at 8:00 p.m. Saturday evening. The band will again play during the church
service. That non-denominational service will be conducted by Ben Fugate in the tent at Wagner Glade
Sunday morning at 8:00 a.m. The public is invited.
Provided by local food trucks, food will be available throughout the event this year. Owen’s Concessions
will serve fruit smoothies. Best Vittals, LLC will be serving breakfast and later in the day, sandwiches
including hamburgers and tenderloins. Dave’s Hot Dogs will be serving a variety of hot dog sandwiches.
The Civil War Living History Weekend is sponsored by the Shelby County Historical Society and funded in
part through a grant from the City of Sidney Lodging Tax Fund. Admission is free. Programs are
available for sale that contain the full schedule of activities as well as information about the important role
that Shelby County played in the Civil War.